According to WHO, air pollution kills at least 7 million people annually. The deaths are from conditions like stroke, lung cancer, obstructive respiratory diseases, and heart disease. If you have visited major cities like New York, the impact of air pollution is evident from the hanging smog that engulfs the city. In developing countries, the condition is even worse because the populace is highly exposed. Data from the World Health Organization shows that more than 90% of the world population is exposed to air pollutants above the organization’s health limits. But is there a solution from the environmental benefits of solar energy?

According to John Walke, Director of Clean Air Project, energy use and generation are the primary contributors to air pollution. Fortunately, there are feasible options that can help avert this problem. The use of environmental-friendly energy options can solve the problem of energy.

It is not all gloom. The latest trends show a decline in air pollution because of increased sensitivity to global warming. The proactive approach to the potential impacts of air pollution has reduced air pollution across the globe. One industry that can play a critical role in environmental conservation is solar energy. Installing a single solar panel is equivalent to planting 150 trees in a year.

What are the Environmental Benefits Solar Energy?

Fossil fuels are the primary contributors to air pollution in the world. The fuels release sul

fur dioxide and nitrogen oxide, which are suspended in the atmosphere. When it rains, the chemicals cause acid rain, which is

also not safe. Apart from that, the gases can cause respiratory complications and other diseases leading to death.

Solar energy can solve the problem of air pollution as an alternative to fossil fuels. The panels do not emit any gases to the environment from installation to use. Project Sunroof data explorer (November 2018) shows that if a state like Texas, its full solar potential is like taking over 16 million cars from the road in a year.

Hydro-power uses fossil fuels to pump water in dams and the electricity generation process. Therefore, the energy source is not clean because of its production process. Coal is also another air pollutant that has been used for ages. The fossil fuel is common in mass manufacturing in big factories. Options like solar cars will reduce air pollution, especially in major cities across the globe. 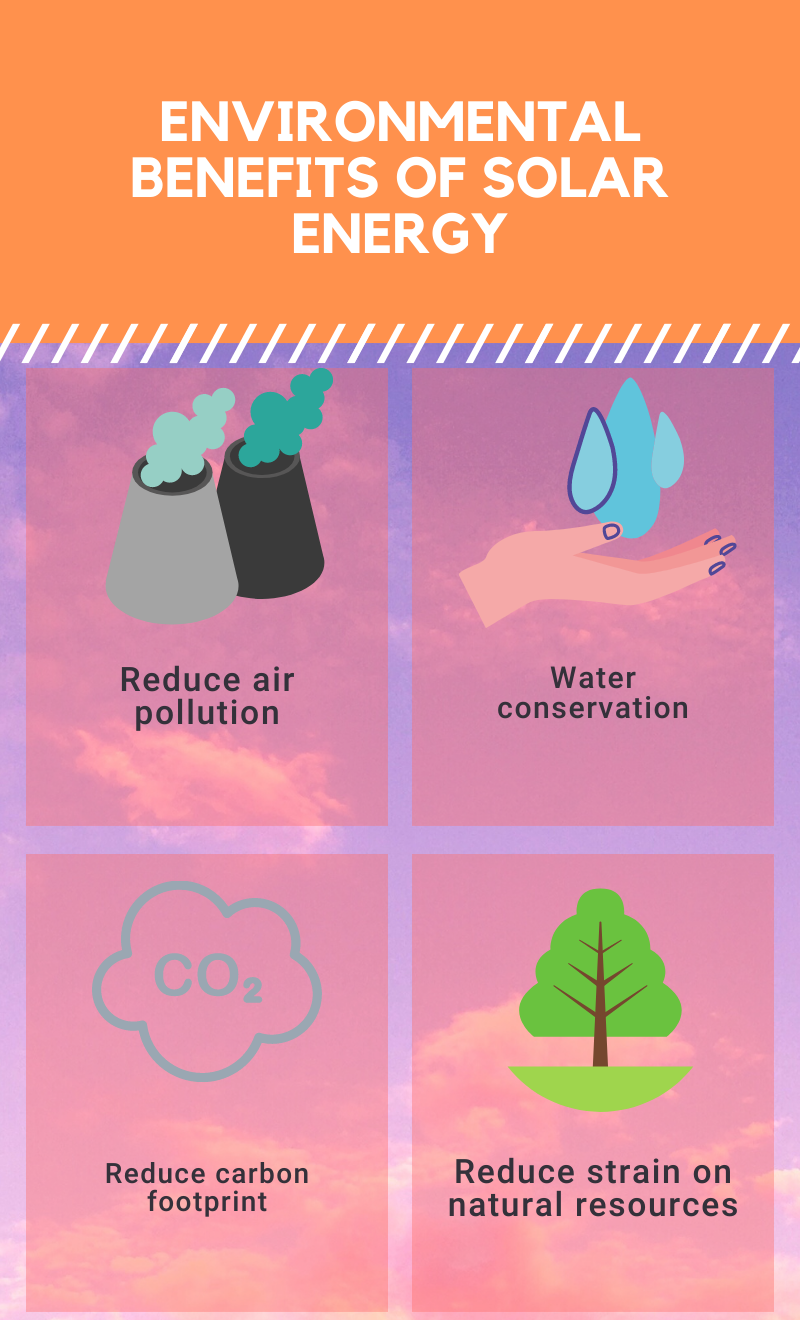 Power plants require approximately 700 gallons of water for cooling. On the other hand, solar panels do not need water or extra equipment to produce electricity. Therefore, solar power can increase water supply, especially in major cities where the resource is scarce.

Nuclear power also uses water in electricity generation. In hydro-power, dams are constructed to collect enough water. Consequently, the construction disrupts the ecosystem. People and animals have been displaced to give way for power plants because they require a lot of space for equipment and water collection.

Fossil fuels like coal and petroleum use a lot of water in the generation, refining, cleaning, and transportation. Considering that freshwater is becoming a rare resource, it is prudent to conserve water sources. Solar panels work well where there is enough sunlight throughout the day- mostly in arid and semi-arid areas. Water is a scarce resource in these areas, and an option to conserve what is available will have a significant impact on residents’ livelihoods. The residents can use the water for agriculture and other vital needs.

Have you heard about floating solar panels? Floatovoltaics are solar panels cells suspended in water bodies. The technology helps to reduce the rate of evaporation. Unlike fossil fuel vehicles, solar cars require less water. In Napa, Japan, one vineyard is said to have reduced water loss by up to 70% after installing floating solar panels.

The safe limit of carbon emissions per person is approximately 3 metric tons per year. Greenhouse gases have led to climate disruptions across the globe. We have seen an increase in natural calamities like drought and floods. According to projections, temperatures could increase by up to 4°C if we do not cut the current carbon footprint by half. By 2050, summers and winters will be warmer than in the current global average.

Renewable energy sources are the way to go to sail through the storm of climate change. Solar energy can play a significant role in the eradication of carbon dioxide by replacing fossil fuels.

Fossil fuels are in decline because their formation takes millions of years. On the contrary, the use of the energy source is on ever-increasing demand. Although we might still have reserves to last global consumption for years, the non-renewable resources will be depleted if we don’t take action now.

Every year, the world uses 11 billion tons of oil. The deposits of fossil fuels are decreasing at a rate of 4 billion tons every year. If the current oil consumption trend continues, the resource could be depleted in the next 53 years.

But what could happen in the case of fossil fuel resource depletion? We could not only run out of an energy source, but it could also be detrimental to life on earth. The ice in places like Antarctica could melt, causing a massive rise in water levels. The water could sweep away most of the major cities in the water.

The depletion of natural resources has detrimental effects on the economy. First, it could lead to energy prices increase. Consequently, the cost of living goes up. On the contrary, there is more than enough solar energy to be tapped. With more than 430 quintillion joules of energy from the sun every year, it is enough to seamlessly run the world.

Solar power can be an excellent alternative to conventional energy sources. It helps in the conservation of the environment through the reduction of pollutants and the protection of resources. Apart from that, as a renewable energy source, the sun can never be depleted even in a billion years. Tap the environmental benefits of solar energy to conserve the earth for future generations through solar installation on your commercial or residential property.